Denver Nuggets: Down but not out 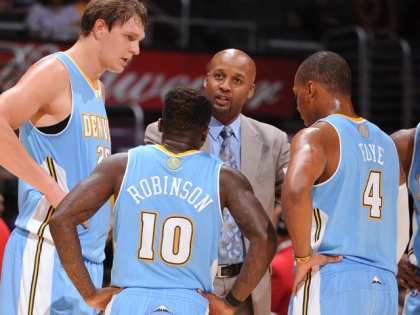 Today marks the season opener for the Denver Nuggets as they took on the Sacramento Kings in Sacramento. If you haven’t been paying attention to the Nuggets this off-season, you might have a few questions.Whose that strange man standing where George Carl usually stands? Just how many new players did we acquire? That question might follow with: is that seriously Nate Robinson? With so much change this season there is bound to be some confusion, but luckily I’m here to explain.

What did the Denver Nuggets lose this off-season?
-Coach of the year George Carl
-Forward/Guard Andre Iguadala
-Executive of the year gm Masai Ujiri
-Guard Corey brewer
-Center Kosta Koufos
-Guard Julyan Stone
*additional blow to Nuggets roster: Danilo Gallinari is still out for at least a month with his previous knee surgery, and Wilson Chandler is still out with strained left hamstring.

Despite only a 2 point loss tonight, the Nuggets are not close to their potential. With so many new additions and changes to the team, it’s going to take more than a few games to develop that winning chemistry. Losing players that were integral to success last year would be a great blow to any team, which is exactly what is happening in Denver. Slowly we’re taking these pieces and putting them together. As early as it is in the season, we don’t know just how good we’re going to be. So let’s look at the positive: our defense looked solid, we didn’t play well, but we still almost tied it with a last second layup attempt by Ty Lawson, and it’s EARLY.

Look for the Nuggets on November 3rd as they take on the Portland Trailblazers at the Pepsi Center.