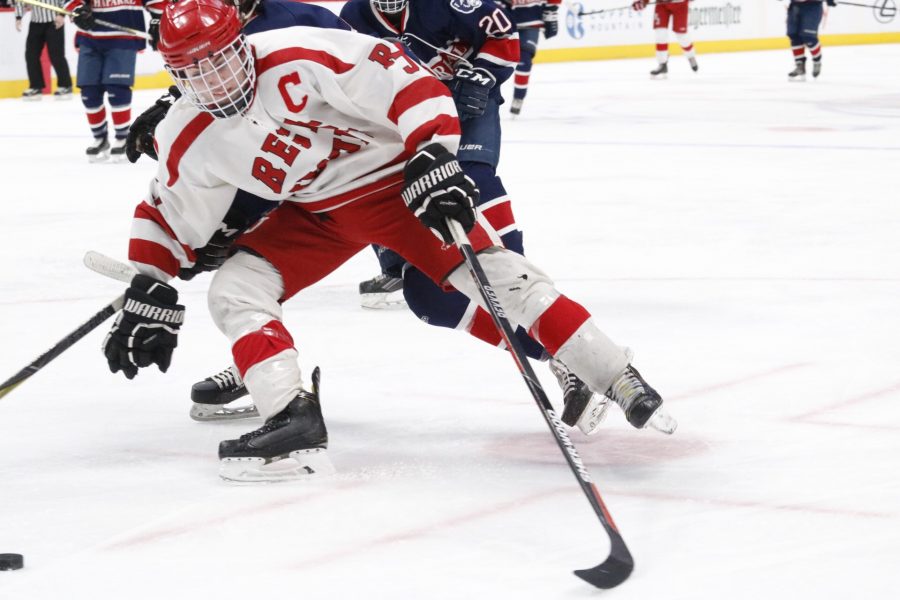 These are just some of the accolades and accomplishments that Regis Jesuit senior Kale Lone has achieved over his four year hockey career at Regis Jesuit, one of the most decorated in school and state history.

Coming into his freshman year, Kale level of expectation amazed Regis Jesuit coach Dan Woodley. “I saw him skating and immediately knew he had all the tools to become an excellent hockey player,” said Woodley.

With high expectations, Lone still had mixed emotions coming into his freshman year. “I was really nervous, I looked at the older guys like they were all stars and i never thought I would be able to play with them,” said Lone. “Everybody was intimidating, so that was something I had to get used to.”

His freshman year, Lone played an integral role during the team’s state championship run, where he would win his first of three rings for the Raiders. “Being the young guy gave me lots of motivation,” said Lone. “Through my play I had to demonstrate that I could help the team win a state title.”

After that season, with the core of RJ’s team having graduated, Lone started struggling with himself. “I had it in my head that I was too good and I couldn’t of gotten any better,” said Lone.

Woodley noticed this down year as well. “He sort of had a year where he said ‘I’m going to be defensive, I’m going to do what I can do because that’s something I know for sure can happen.’ Instead of really projecting himself and continuing that offensive growth,” said Woodley

The road to get where he is today hasn’t always been easy for Lone. He has had to rely on those around him, especially his family for support. He describes his family as his “#1 supporters,” and recognizes all they’ve done for him.

“My mom and my dad have always gone to bat for me,” said Lone. “We always haven’t been in the financial situation to afford the game, but somehow some way, they’ve always been able to make it through and get me where I need to be,” says Lone.

On the ice, Lone learned a lot from fellow teammate, and former Colorado Player of the Year, Shane Ott ‘18. “Shane is one of those guys you look at and you want to steal traits from him because he’s so good,” said Lone. “He’s a great play maker and I watched him last year and I took that into my own game.”

Lone received this year’s Colorado Player of the Year award. He knew that it wouldn’t of been possible by himself. “I guess I’m lucky enough to have coaches and staff and CHSAA who are willing to go to bat for me,” said Lone.

Through all four years, traveling to tournaments, playing on a national stage, and skating with some of the best high school players in the country, Lone has managed to treat every game the same. He’s not a superstitious person, the only pregame routine he keeps the same is blasting music in the car to deafening proportions on the way to the game.

He has kept the mindset for every game, explaining “When Rowan Barnes was here he always asked me if I was ready for a game and I would reply ‘Just another game.’ So I try and go into every single game the same,” says Lone.

Along with his family, there is another person who has helped Lone become one of the most decorated high school athletes in state history. “Coach Woodley has been a whole other influence on my life. He has been like a second dad, that’s how close we’ve gotten,” said Lone. “He has taught me life lessons, as well as lessons in the game of hockey itself.”

For Coach Woodley, Kale has made an impact on his life as well. “Kale is one of the players I will miss the most,” said Woodley. “He has been on my team for four years and has been like a son to me. I see him everyday. He comes into my classroom and spends time with me.”

This year, Kale assumed the captain role on the Varsity team. It was an adjustment for him, due to his personality. “I don’t think Kale necessarily was a standup speech kind of guy,” said Woodley.

The future is wide open for Lone. He has a summer filled with junior hockey tryouts across both Canada and the United States. He’s left his on mark on Colorado high school hockey, and is ready to continue on.