Climate Change: How We Are Destroying the World By “Bettering” It

An Opinion Piece on how humans are essentially destroying the Earth 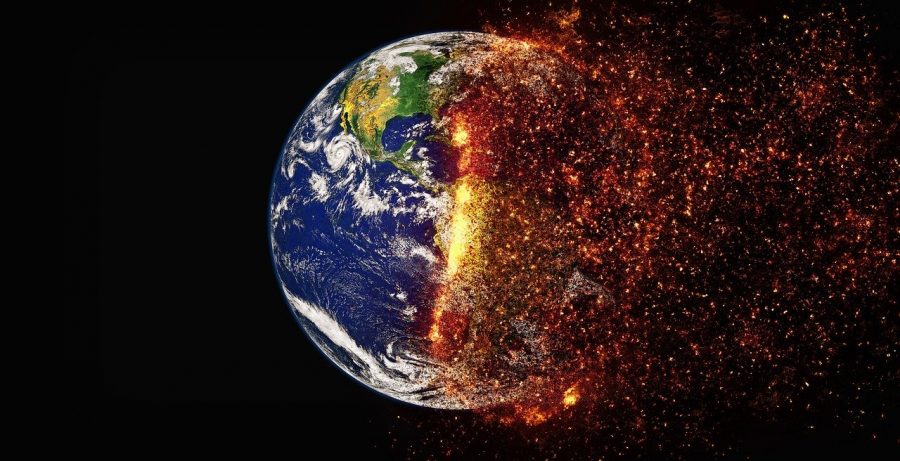 A picture symbolizing the potential effects of climate change, compliments of Pixabay

Would you believe me if I told you that the human race as a greater whole is committing suicide?
That may sound a bit absurd, but it’s true. Climate change, depletion of fresh water, deforestation, mass pollution, and global warming are all real problems. And at the center of it all is humans. By the end of this article, you will walk away convinced that humans are destroying the Earth by trying to “better” it.

First, let’s discuss global warming. Our planet has been unnaturally warming since the start of the Industrial Period, according to nrdc.org. Since 1981, that rate has doubled, and it’s gotten to the point where scientists studying climate change have suggested we change our ways before 2040 if we are to avoid apocalyptic living conditions, with hundreds of deaths and 100 million people in poverty by 2030. At the heart of the list of carbon emission contributors? Building & construction at a whopping 38%. That means that the new Starbucks around the corner or the road that they just built nearby is helping to kill the ozone layer.

Luckily, our newly instated government, as well as some famous celebrities, are helping to cut down on these monstrous CO2 levels. For starters, during Trump’s office run, he called global warming a “hoax” and left the Paris Climate Agreement, related in 2015. His reasoning was that it was to “fulfill his duty to protect America and its citizens.” Yeah, OK buddy.

Fortunately, when Biden was recently elected, one of his first moves in office was to rejoin the agreement.

“We can no longer delay or do the bare minimum to address climate change. This is a global existential crisis. And we’ll all suffer the consequences if we fail,” Biden said on Jan 20.

Biden isn’t the only one speaking out on climate change. A plethora of well-known celebrities, including Leonardo DiCaprio, Billie Emiliano, Mark Ruffalo, and more, have all been very active on social media about the matter. (https://www.refinery29.com/en-us/2019/09/8467975/celebrities-climate-change-activist)

As a matter of fact, Ruffalo had this to say on his Instagram: “As a board member of @100isNow, I stand with all of you. As we fight the biggest civil rights issue of our time, we must actively support the frontline youth leaders who are putting their bodies on the line to be heard. Those who continue to tirelessly do the work to ensure the planet they’ve inherited is clean & livable.”

But global warming isn’t the only major threat to living conditions on Earth. It’s about time we dive into pollution.

There are 3 types of pollution; water, air, and land, with each being just as lethal to human life. For starters, water pollution is estimated by the World Health Organization to cause about 485,000 deaths each year and about a million annual water animal deaths. Air pollution comes in at 4,000,000. Land pollution doesn’t exactly kill anyone directly, but it is absorbed into trees, which pass it onto other organisms over time and kills surrounding wildlife. 80% of dead birds are found with some form of plastic waste in their stomachs. Americans only account for 5% of the total world population, but are responsible for approximately 30% of the world’s waste. In short, we have a knack for polluting things.

However, we aren’t completely hopeless. Although there are a gaggle of people that are recycling-challenged, the US has, for the most part, made steps to shut this down. The EPA, or the Environmental Protection Agency, has done things such as reducing toxic industrial emissions, burning cleaner gasoline (even though gasoline is bad itself), and addressing air pollution through voluntary programs. Even more celebrities have showed concern about this. The She-Devil (Meryl Streep)? She’s been advocating for the Natural Resource Defense Council since the 80s.

“Humans are very self-interested. I became interested in all these things when I was consciously feeding a baby and had a sense that everything you do is going to have an outcome further down the road. So I was very conscious to try to do the right thing and do well by our kids,” is what she said in an interview.

Now, I understand what some will say.

“Science has taken us so much farther in a couple hundred years than our previous eco-friendly routes have taken us in thousands of years.”

“Every great thing must come with sacrifice.”

“Something stupid.” (Not really, but that’s what I hear when they say stuff like this)

Well, these things aren’t exactly false. What else isn’t false? The decadent 50,000 species of animal that die each year due to deforestation. The seven million Homo Sapiens that succumb to sickness of pollution each year. The estimated egregious 850,000 exceptional people that expire of endless lack of fresh water. Yes, progress is necessary to survive as a people, but that progress shouldn’t have to involve suffering of plants, animals, and humans alike.

People, especially the government, have to understand that by trying to make the world better, we are destroying, and potentially, ourselves. I mean, it’s literally to the point where we’ve just decided to try and move to Mars (I’m not even giving a link for this one, just look it up, it’s everywhere). We just need to keep the interests of not only ourselves and the Earth at heart, but also the conditions that the next generation, our future will have to live in. Using the words of Cate Blanchett, “I care about climate change because of our children. I want to safeguard their future.”