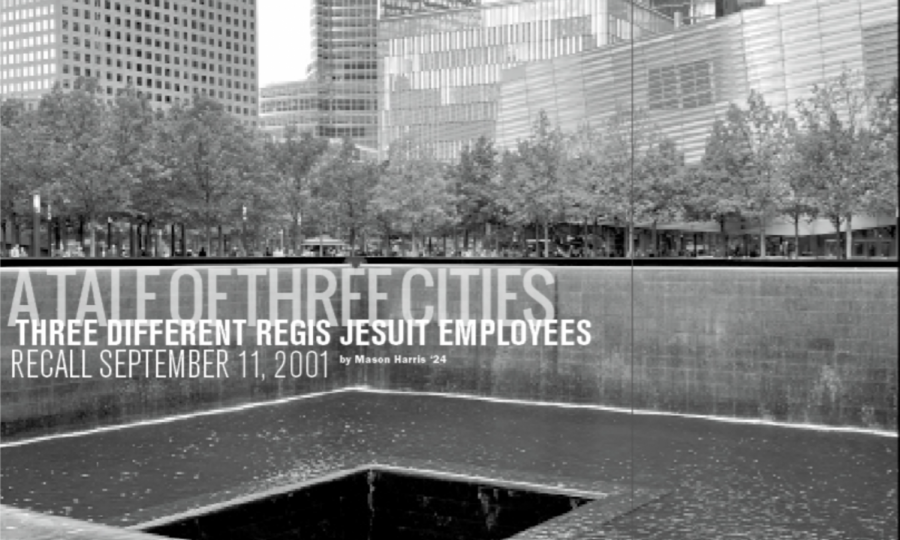 It was 8:47 a.m. on a Tuesday morning. The sun shone brightly over the towering New York City skyline. The Empire State Building and the World Trade Center served as pillars in a dense city, hovering above the clouds. Halfway across the country, dawn had just begun. The glow of sunlight ricocheted off the Rocky Mountains. It was an ordinary, alluring Tuesday morning in Denver, Colorado. President David Card ‘87 sat patiently at the traffic light, prepared to turn onto South Lewiston Way from South Parker Road. The light lingered red. Time stood at a standstill. Vehicles rumbled past his car.

At long last, the red light vanished. The radio’s usual songs played in the background as he drove towards Regis Jesuit High School. Card’s sense of normalcy shortly dissipated as the cable news broadcast interrupted the music.

“This just in, you are looking at a very disturbing live shot there… we have unconfirmed reports this morning that a plane has crashed into one of the towers of the World Trade Center,” the radio said.

Card, like many, believed that a small single-engine plane had accidentally struck the towers.
“It seemed like there was confusion – and I think appropriately so – when things were unfolding,” Card said.

At that moment, the World Trade Center had unknowingly entered the last 102 minutes of its existence. The time dwindled, yet few knew the towers were in danger of collapsing.

“The day was surreal. It was exceedingly difficult to comprehend the scope of destruction and meaning of what had happened,” Card said.

Halfway across the globe, Fr. Thomas Rochford ‘64 had just moved into the Jesuit Headquarters in Rome, Italy, and his new position in their communications office. It was 3:00 p.m., and his shift was nearly done.

“It was an ordinary morning, and the last thing I was thinking of was the United States, and even less, some big attack. So, I was sitting there quietly, working. I wouldn’t say it was a boring day, but I was trying to get in my office and set up,” he said.

Suddenly, he heard his phone ring. He walked over to his desk and realized the caller was unknown. Without hesitation, he answered. The voice urged him to check the news, without further explanation. He walked across the room to his television. By the time he checked the news, the damage to the first tower was extensive. Smoke billowed out into the bright sky and debris covered the streets. People watched from afar as the first responders scrambled to save those still in the towers. The camera abruptly panned away from the streets and up to the sky. A plane flew directly into the second tower.

“All of a sudden, this other plane comes in. I was speechless,” he continued. “There’s a frustration because you feel the fragility of life, and because I couldn’t do anything, as I was so far away.”

During this time, Mr. Jordan Jones, S.J., was attending the United States Naval Academy in Annapolis, Maryland. He had enrolled a few months prior to the impending devastation at the World Trade Center.

In the moments preceding the attack, he had just entered chemistry class. His instructor, who was formerly an Air Force Captain, ran into the lab with the news. Both towers of the World Trade Center had been struck, and the nation was under attack. The cadets were stunned. The campus went from calm to alert, enacting Force Protection Condition Delta (FPCON DELTA), a military protocol for terrorist attacks that prevents anyone from entering or vacating the facility. Patrol squadrons were immediately activated to guard the campus.

There was consistent concern among military officials that the United States Naval Academy was a primary target of the terrorists. They, alongside the public, were heavily prepared for an additional attack for the following three months.
On that day, a nation stood still as it watched one of the deadliest terrorist attacks ever. The tragedy caused extensive destruction, claiming nearly 3,000 lives in the process. For Jones, the tragedy forever changed the United States and its people.

“In a lot of ways, America lost its innocence.”